In 2004 Mr. John Holmgren toured the country in a Freightliner® Century® with 53’ foot trailer to remind America to never forget the tragedy that happened on September 11, 2001 and to honor the victims lost in these events. The entire truck from front to back was covered with the names of those lost including police officers, firefighters, those in the towers on that day, and the crew and passengers of the four flights that were taken down. To raise funds, John sold T-Shirts and teamed up with Die-Cast Promotions (DCP) to make a 1/64 scale replica of the honorary truck.

This year marks the 20th anniversary of the 9/11 events and to honor the victims, Mr. Holmgren teamed up with First Gear to offer another replica to commemorate that monumental day. The 20th anniversary Rolling Memorial 1/64 scale diecast replica has been modernized to the Freightliner® 2018 Cascadia® and is sponsored by Tunnel to Towers. A portion of proceeds of every truck sold will be donated to Tunnel to Towers whose mission is to support our nation’s greatest heroes and their families. 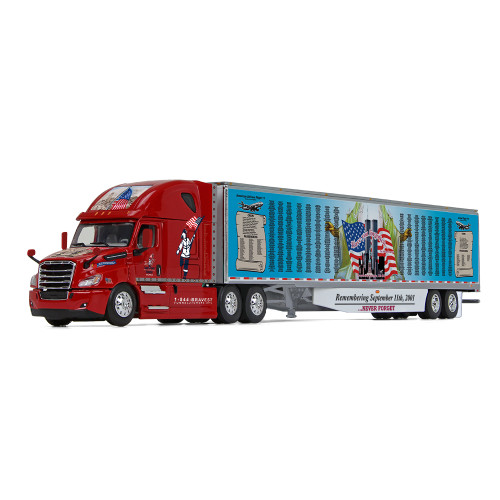